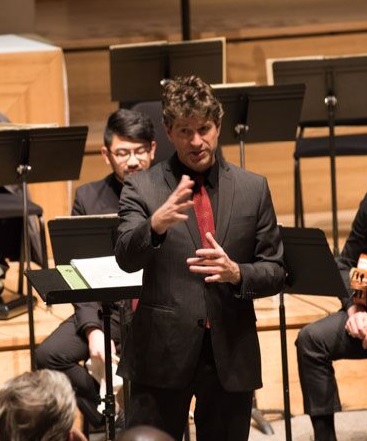 Conductor David A. Grunberg is founder and director of the Spectrum Symphony of New York. Concert reviewers have described his performances as “powerful, kinetic performance,” having “precision and enthusiastic fervor,” “determined focus,” and being “positively joyous”. Grunberg’s musical training and practice includes violin performance, theory, conducting, choral singing, composition. From 1994 to 1998 he was Assistant Conductor of the New England Philharmonic, where he conducted works by prominent and emerging living composers. From 1998-2001 he was Music Director of the Cape and Islands Youth Symphony Orchestras (MA), who under his direction were “renown for their expertise and voracity” (Art Talks Cape Cod). His recent repertory with Spectrum includes, in addition to the standard orchestral repertory, solo concertos by Mozart, Brahms, Schumann, and Prokofiev; and premieres by Balint Karosi, David Biedenbender, Bruce Saylor, Philip Wharton, Anthony Iannaccone, Peter Alexander, Lev Zhurbin, JunYi Chow, Russell Courter, Deborah Mason, and Nick DiBerardino. He conducted the world premiere of Deborah Mason’s full-length opera “The Rape of the Lock” in 2016 with soloists and orchestra, and the NY premiere of Prince Jozef Poniatowski’s Mass in F with soloists, chorus, and orchestra. Grunberg graduated with a Bachelor of Science degree from Cornell University where he also studied music theory, and then violin and formal composition at Berklee and Juilliard. An alum of the Conductor’s Institute at Bard, and The Pierre Monteux School, his principal conducting mentor in Boston was opera conductor Jeffrey Rink. Grunberg also conducted in masterclasses in orchestral and vocal conducting with Gustav Meier and Kenneth Kiesler in Michigan.

No Comments » for Artistic Director